The title song and the opening track of their third album is from The Beatles’ first feature film. On its release – the same day as the LP A Hard Day’s Night – it became their seventh UK single. It was a song written to order by John and Paul, after a quip from Ringo became the working title for the movie they had begun filming on 2 March 1964. The official press announcement of their forthcoming film, A Hard Day’s Night came on 13 April, and three days later the band was at Abbey Road to record the title song.

The final scenes for the 87-minute movie were shot on 24 April, with the edit completed in short order for the film’s premiere at London’s Pavilion Cinema. This took place on 6 July 1964, when over 10,000 fans stopped the traffic in nearby Piccadilly Circus. On 10 July, the band flew to Liverpool for the northern premiere of the film, the same day that the single came out in Britain. It charted eight days later, and the following week it went to No.1.

The single had its American release a week later than the UK and it was still at No.1 on the Hot 100 on 11 August, the date of the film’s US premiere. United Artists distributed the movie in America and one of their executives apparently asked the director, Richard Lester, if he could dub The Beatles’ voices with mid-Atlantic accents to make it more understandable to American audiences; Lester and the band quickly rejected the request.

In 1965, a week after the announcement that The Beatles were to be awarded the MBE by Her Majesty the Queen, the band started a 14-day European tour. The first date was the Palais des Sports at the Place de la Porte de Versailles in Paris on 20 June. The band played at 3 pm and then again at 9 pm, with both shows recorded by French radio. The clip is from the evening performance of a live transmission and was also filmed by French TV’s Channel 2 and shown on 31 October 1965 as Les Beatles.

‘A Hard Day’s Night’ featured mid-way through the band’s set in Paris and stayed there throughout the tour, which took in Lyon, Milan, Genoa, Rome, Nice, Madrid before finishing in Barcelona on 3 July. In the clip, George is playing the 12-string Rickenbacker that he used to such good effect on the original single, particularly its unforgettable opening chord. George’s Rickenbacker 360/12 was the second one to be made by the company and it’s the guitar that he played on many of the songs on the album that accompanied the film. 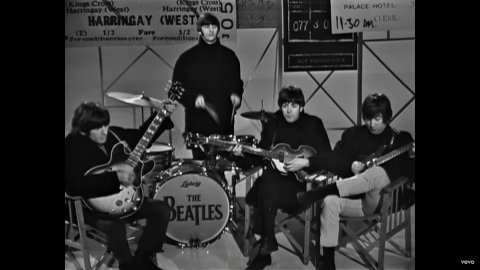